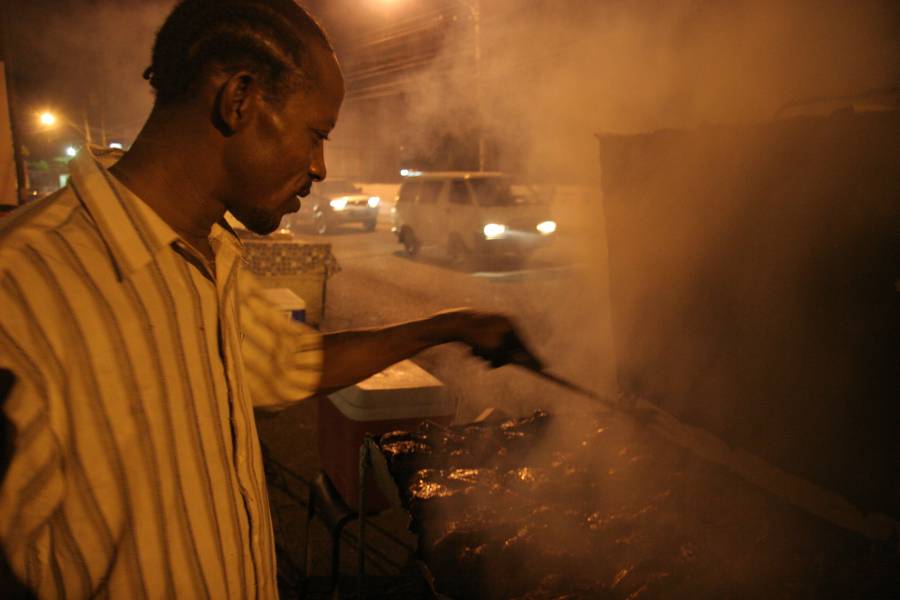 While it is sometimes said that Jamaica's national dish is fried chicken from KFC, there are a host of authentically Jamaican fast-food joints to compete for that title, like Tastee Patties, Juici Patties, Island Grill, and Captain's Bakery. While not all of these restaurant chains serve the country's bonafide national dish, ackee and saltfish, each offers its own take on the "quick service" format.

In fact, only select international franchises have been able to survive in Jamaica; notably, both McDonald's and Taco Bell were unable to do enough business to stay viable and closed shop. Other fast food chains, like Domino's Pizza, Pizza Hut, Popeye's, and Subway, do relatively well in a few locations scattered around town.

Pan chicken, patties, and loaves have traditionally been the food of choice for Jamaicans on the go, however.

Pan chicken vendors set up all over town from evening until the wee hours, and after 10 p.m., save for a few poshe bars, they're you're best bet for late night grub. Some of the best spots in town for real, hot-off-the-grill pan chicken include the line of vendors next to one another on Red Hills Road just beyond Red Hills Plaza heading towards Meadowbrook and Red Hills. You can also whiff the pan chicken as you approach Manor Plaza in Manor Park on the upper reaches of Constant Spring Road in the evenings.

A few dependable pan jerk vendors hawk their fare in the evenings on the corner of Northside Drive and Hope Road by Pizza Hut, and they have a devoted following. Jerk pork (US$9/lb.) is sold on one side of Northside Plaza and jerk chicken (US$4/quarter) on the other.